7805 is a linear voltage regulator, so it is not very efficient and it has drop out voltage problem. It wastes a lot of energy in the form of heat. You can calculate the wasted energy with following formula. This formula will also help you to estimate the size of heatsink plate you will require to disperse amount of heat generated by 7805. (Input Voltage – 5) x Output Current
Suppose the input 15 volt and output current you require is .5 Amp by using above formula

5W energy is being wasted as heat and you will need a decent sized heatsink plate to disperse this heat to ease your 7805. On the other hand the energy you are actually using is only (5 x 0.5Amp) =2.5W. So you are going to waste twice energy then you are actually utilizing. On the other hand, if you lower your input voltage to 9V then at the same amount of load, only 2W { (9-5) x 0.5 } energy will be wasted as heat.
So the conclusion is, the higher the input voltage get, the less efficient your 7805 will be. You should try to stay slightly over 7.5V. However don’t get bellow 7.5V as your 7805 won’t give a regulated output if the input voltage get bellow 7.5V. If your input voltage are less than 7.5 like 6V then you should consider using a low dropout voltage regulator such as LM2940. Pin connections of LM2940 are also same like 7805.
You don’t need extra components to create a 5 volt regulated power supply with 7805. However it is a good idea to use one capacitor on input and one on output pins to make output voltage smooth but then again, they are not necessary to be used.
As per specs, 7805 input voltage should range between 7.5V to 35V but personally I haven’t tried more than 15V yet. Maximum output current of 7805 is 1A with a good sized heatsink plate. If you are planning to use more than one 7805 in parallel to get more current (above 1A) then you better try to put .47Ohm (15W) resistor on the output pin of each IC to cover the slight voltage difference as technically no two 7805 can provide exactly same output voltage. 15W resister is used because large resistors can withstand more heat however you can use any resistor as long as it is above 5W. Bellow is the schema in which two LM7805 are used in parallel. 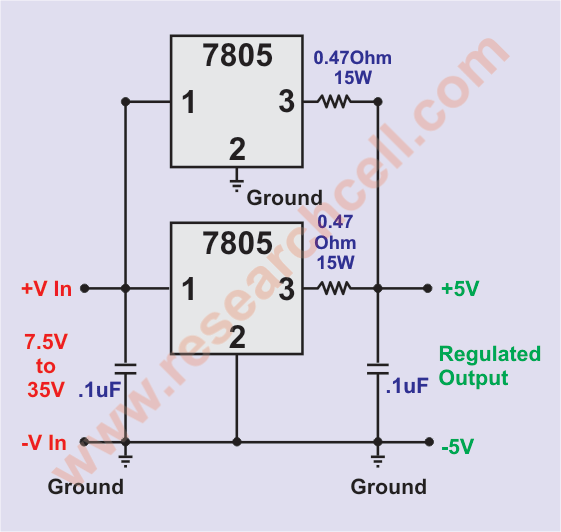 7805 Used in Parallel Please note that LM7805 is not designed to be used in parallel that is because no two LM7805 can output same volts.One of them may output 4.99V while the other will output 5.01V. Due to higher voltage, the later will try to take more load than the first one. Also another issue is the higher voltage IC (5.01V) will try push the low voltage IC above it's maximum volts (4.99V). The lower voltage IC will sense the voltage higher than its upper limit and will shutdown putting all the load to higher voltage IC. It will then power-up again once the volt drop as the higher voltage IC wont be able to take all the load but still this can start an undesirable oscillation especially if the voltage difference is significant.
Above circuit is actually an attempt to balance slight voltage difference between both regulator ICs using two resistors. As soon as a load is applied to this circuit, the load will push the volts after resistor to slightly less than 5 which will stop any oscillation caused by voltage difference and will also balance the load a bit more evenly. This way you may be able to extract slightly less than 2A current with the price of a very slight voltage drop bellow 5V in final output. Although i have never came across any issue while using this circuit but still i do not recommend you to use it to power-up expensive devices.

Yes LM340-05 and LM7805 are interchangeable, In fact LM340-05 is just another version of LM7805 except that it seems to be discontinued now. I don't see it very often except in very old circuitry. If you somehow found a piece of it, you can use it in place of 7805 without any issues.

My LM7805 Keeps Switching off and Then Turns Back on Itself. Is it Faulty?

That is most certainly caused by an overload or due to a thermal shutdown. You should consider using a bigger heatsink plate and also make sure your circuit is not overloading your 7805. Please note that frequent thermal shutdowns can permanently damage your 7805 so you need to act fast.

Can you please confirm if I can use 78l05 in place of 7805 if my load is smaller? are they same?
@robert Yes they are functionality wise same but there is a huge difference between output current of both of them. If the device or circuit you are powering requires less than 100mA of current then you can safely use 78l05 in place of 7805. Also you probably need to reduce your output capacitor rating to 10nf instead of 100nf.