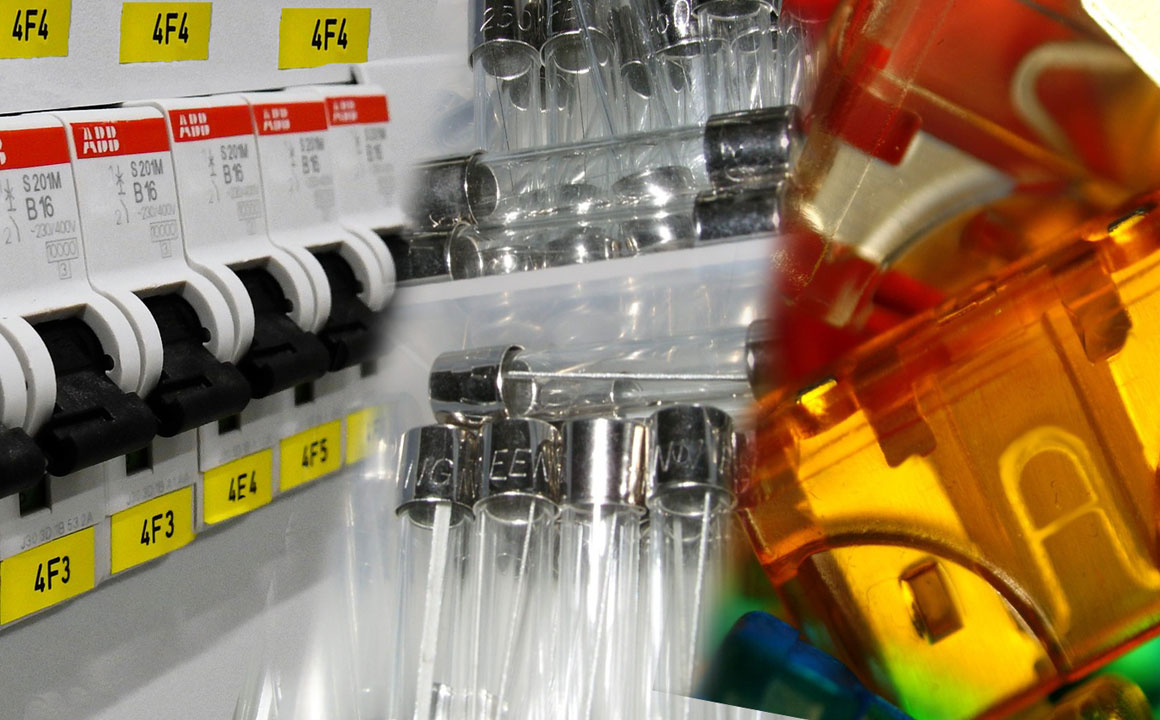 Fuse Vs Circuit Breaker Time Required to Break the Circuit:
A Fuse or a circuit breaker, both have the same purpo
se which is to break the circuit as quickly as possible to avoid possible burning of equipment and wiring. Circuit breakers are made using mechanical parts which physically move to break the circuit. This movement is usually achieved by using the magnetic field or thermal changes. Fault response time of a circuit breaker is usually more than 10 milliseconds. It is good enough to prevent fires but when it comes to sensitive equipment, this time interval is too long and can easily cause them severe damage.
On the other hand, fuses which we normally use in our houses are built to thermally burn in order to break the circuit. The burning time decreases as the current flow increases which is very beneficial. In case of short circuit where a large flow of current is involved, the fuse will burn far quicker than the tripping ability of a circuit breaker. An average fuse will only take 1 or 2 milliseconds to burn. This gives fuses an edge over circuit breakers. However, fuses do not instantly blow at slight overloads, for example a 15A fuse will not quickly blow at 15.1A or even 16A. On slight overloads it may take several seconds to blow. Usually a non-delaying fuse will need double amps than its rating to blow instantly.
Winner: I think a good fast fuse can easily outperform any circuit breaker so Fuse wins in this department .

Re-usability:
A fuse can only be used once and will need to be replaced after every fault. Circuit breakers can be reset using a button after every overload or short circuit event. It is also much quicker to reset a circuit breaker using a button while it will take a few minutes or more to replace a fuse.
Winner: Circuit Breaker wins here.

Cost:
Circuit breakers are significantly costlier than fuses. However please keep in mind if you are expecting a lot of overload or short circuit events then the combined cost of fuse replacement can catch up with that of circuit breaker.
Winner: Fuse.

Handing Safety:
Fuses are usually placed close to mains therefore changing a fuse is a bit risky task as it involves manual placement of fuse inside fuse box using hands. On the other hand, Circuit breaker can be easily reset using a button which is certainly less risky.
Winner: I think Circuit Breaker easily wins.

Reliability:
Fuses do not have moving parts therefore they do not fail while the most fearsome issue with a circuit breaker is the possibility of failures. Although it is very rare but still sometimes circuit breakers fail to break circuit due to jamming of internal mechanical parts. It can result in burning of entire house or building.
Winner: To me I think the main difference between a circuit breaker and fuse is reliability therefore low chance of failure makes Fuse a winner.

Calculation of Ampere Rating for your Circuit Breaker

In order to take full benefit of a circuit breaker, you will need to calculate its ampere rating using the following guide lines.

Your fuse Amp rating should be in the middle of your calculated circuit breaker Amp rating and your wiring's Amp rating. That way it acts as a failsafe in case your circuit breaker fails and will prevent your wiring from catching fire.
Remember! Never install an over rated fuse in your fuse box. It is your last line of defense against electric short circuits.

I agree to most of the article however i think modern hybrid circuit breakers (thermal + magnetic) can outperform a fuse in my opinion.
Genius:@Cindi You should note that such breakers are carefully designed to reconnect after every thermal overrun event so they are still not as fast as a fuse which is not designed to be reused so can freely burn.